Dear Friends,
Please consider signing onto this statement, initiated by the National Coalition Against Censorship in response to a series of recent events involving conceptual poet Vanessa Place. The deadline for signing on is 10am Tuesday, June 23. Please send your name, profession, and institutional affiliation to kentaro@ncac.org
As you may be aware, social media attacks on Vanessa Place’s Gone With the Wind re-tweeting project have led various cultural institutions to remove her from a conference committee, cancel a discussion panel and even a whole conference. (The statement gives more details and you can find additional information here: http://lareviewofbooks.org/essay/the-denunciation-of-vanessa-place).
The statement is aimed as a critique of the failure of cultural institutions to respond adequately to real controversies around difficult subject matter. It also intends to break the prevailing silence around the cancellations.
This is just the beginning of what we believe should be a continuing conversation. The Vanessa Place controversy provides an opportunity to deal with urgent issues facing us today: to re-evaluate often-less-than-thoughtful online clicktivism, the flash attack mobs mobilized by change.org type of structures, which provide the quick gratification of engagement at the expense of evaluating and thinking about issues in complex or nuanced ways; to negotiate how cultural institutions deal with attempts at silencing coming from groups whose mission is socially valuable, but whose tactics are sometimes problematic; and finally, to confront the urgency of really – and not just rhetorically - opening up our institutional echo-chambers to debate and dissensus.

U.S. cultural institutions have a critical role in maintaining the openness of social and political debate. That role is threatened when those institutions fail to take on real controversies around difficult subject matter.
A disturbing example involves the conceptual poet Vanessa Place, whose long-running project tweeting the full text of Gone with the Wind has become the object of virulent criticism, mostly conducted through social media. An anonymous online group led the charge, calling the project "at best, startlingly racially insensitive, and, at worst, racist." The same group has also attacked those they see as defending Place.
Ever since the attacks started in early May, in the midst of the controversy and the pressures from the protesters, various cultural institutions have opted or been forced to remove Vanessa Place from a conference committee, cancel a discussion panel and even a whole conference – ­­­to the effect of imposing a silence where the only voices heard are those who attack the project and its author.
On May 18, the Association of Writers & Writing Programs (AWP) acceded to the demands of the anonymous group and a related petition and decided to remove Place from a subcommittee that reviews applications for their annual conference. Paradoxically reiterating their commitment to freedom of expression, the AWP justified the removal as an effort to "to protect the efficacy of the conference subcommittee's work," which they claimed would be compromised by the need to manage the controversy.
Then on May 29, the Berkeley Poetry Conference, which had refused demands to banish Place from the program, scrapped their entire event, citing the withdrawal of a number of the other participants. And on June 6, the Whitney Museum in New York canceled a public program on the subject of the death penalty featuring Place along with philosophers Kyoo Lee and Avital Ronell. The organizers were unable to determine how to secure the integrity of the program in the context of the controversy.
Those protesting have expressed little interest in engaging in a debate about Place's work; their aim has been to banish her entirely from cultural institutions. While they are free to critique and protest an art project, as it is part of the give and take of a democratic culture – for cultural institutions to, in effect, blacklist its author and give in to online attacks from anonymous sources threatens our collective interest in maintaining a vital public sphere.

The cultural atmosphere evidenced by the events around Vanessa Place is chilling to any creative artist or institution that may consider approaching difficult questions around race, sexuality or politics. It makes real debate about emotionally charged issues over which we often disagree nearly impossible. Unless they are prepared to welcome conflict and disagreement, cultural institutions will operate as echo chambers under the pall of a fearful consensus, rather than leaders in a vibrant and agonistic public sphere.
Not only is silencing and suppression dangerous for the culture at large, it does nothing to confront the realities of racism. Censorship has never contributed to the cause of social justice; throughout history it has invariably been on the side of totalitarianism and repression. But in the echo chambers of easy consensus, this lesson is very easily forgotten. 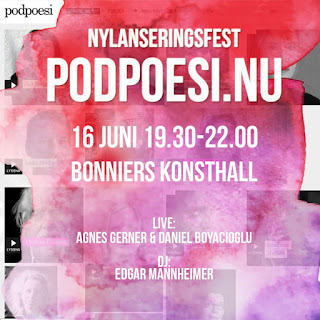 Pictures from StAnza 2015 in St. Andrews

Doktorforsvar i dag i København

For this episode of Ora 21, Daniela Cascella and Salomé Voegelin invite poet and researcher James Wilkes for an hour of conversations, readings, moments of listening and looking, around the elusive notion of rest. A category only grasped through difference and through context, rest is discussed and thematised by Cascella, Voegelin and Wilkes by considering rest as interval, rest as social code and habit, rest as pause in reading and writing, and rest as critical device.
kl. juni 02, 2015 Ingen kommentarer:

THE MAKING OF FOGHORN REQUIEM