These are pretty basic cow sounds

There have been strong transatlantic poetic ties between France and the United States since the 19th century. Dialogues continue through the translation, publication, and adaptation of contemporary French poetry in the U.S.

Organized by Vincent Broqua (UPEC) and Emmanuelle Ertel (NYU), the afternoon’s discussions highlight the current state of such crucial relations: French and American poets, translators, and publishers speak about the art of translating French and Francophone contemporary poetry, about the publishing houses circulating French poetry in the U.S., and about the importance of French poetry for contemporary American poetry. Anne Portugal and Pierre Alferi, two major French poets, will be present and will share their thoughts about translation.

8:00 p.m. (note location)
The day will conclude with a reading organized by Double Change at McNally Jackson Books. Readers include Pierre Alferi, Anne Portugal,Charles Bernstein, Cole Swensen, Pierre Joris, and Tracy Grinnell for the translations of Collobert. The French poets will be translated.
.....

Pierre Alferi is a French poet and novelist. OXO (Burning Deck, 2004) and Natural Gails (Sun and Moon, 1995) were translated by Cole Swensen.

Charles Bernstein is a poet, essayist, editor, and literary scholar. He is Donald T. Regan Professor at the University of Pennsylvania. He has played an important role in fostering French contemporary poetry and his work has been translated in France. His last book, Recalculating,contains translations and adaptations of French poetry.

Tracy Grinnell is a poet and publisher. She created Litmus Press and the journal Aufgabe, which focuses on translation. In 2013, Litmus Press published Murder, Danielle Collobert's first novel, translated by Nathanaël.

Jean-Jacques Poucel teaches at the University of Calgary. He has written on French poetry and recently translated Anne Portugal's Formula Flirt, published by La Presse Books.

Cole Swensen is a professor at Brown University. She is a poet and translator. As publisher, she created La Presse Books, dedicated to the translation of French contemporary poetry (http://www.lapressepoetry.com/). She has translated many works by French poets, includingOXO (Burning Deck, 2004) and Natural Gails (Sun and Moon, 1995) by Pierre Alferi.

Double Change is a Franco-American collective. It curates, records, and archives readings of francophone and American poets in France and in the U.S., and edits a bilingual journal: www.doublechange.org

Organized with La Maison Française at NYU, the Book Department of the Cultural Services of the French Embassy, the French Department at NYU, McNally Jackson Books.
Double Change is supported by the Conseil Régional d'Ile de France and Tamaas.
kl. april 24, 2014 Ingen kommentarer:

A Valentine to Gertrude Stein, Copenhagen May 8-10 ,last day to register today! 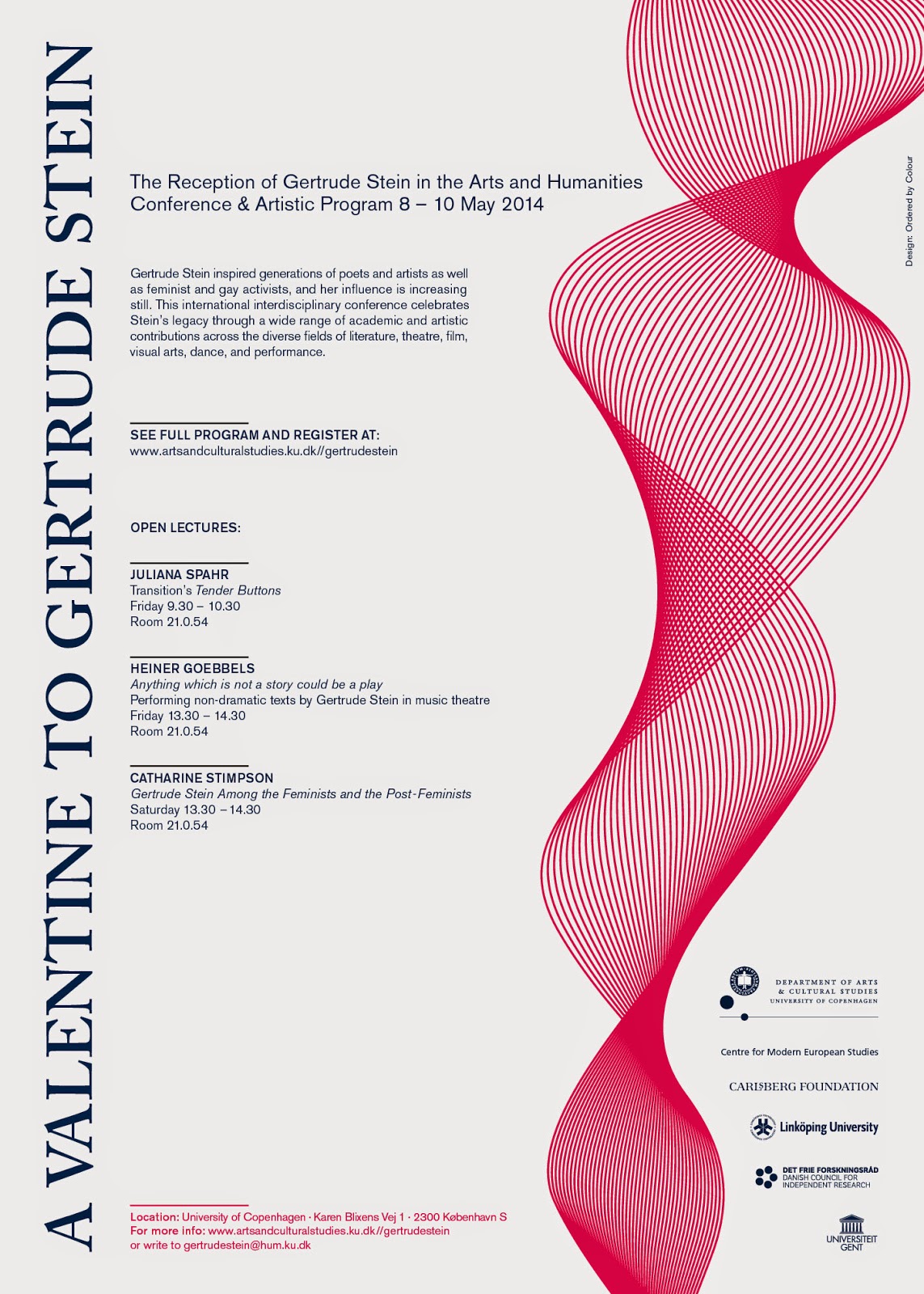 the bynding of this booke is all that remains of my dear friende Jonas Wright, who was flayed alive by the Wavuma on the Fourth Day of August, 1632. King Mbesa did give me the book, it being one of poore Jonas chiefe possessions, together with ample of his skin to bynd it. Requiescat in pace.